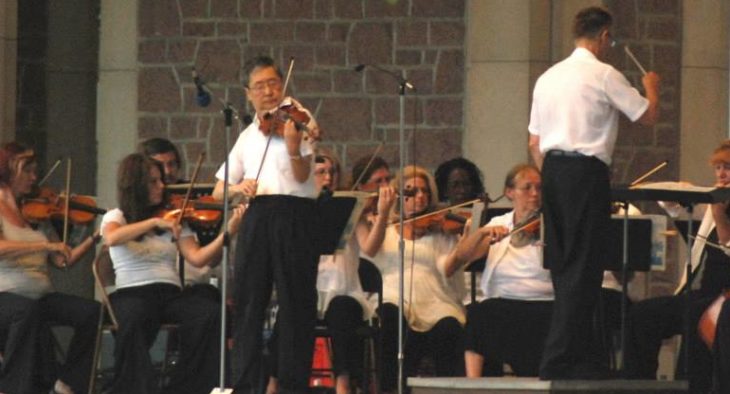 We are sad to announce the passing of former GFO concertmaster Takaoki Sugitani on September 11, 2021, at the age of 82.

Takaoki Sugitani (July 31, 1939-September 11, 2021) was born in Kobe, Japan, where he began both piano and violin lessons before age 10. He later studied composition with Shukichi Mitsukuri. At 15, he won Japan’s most prestigious violin competition and concertized until he was accepted three years later as a student at the Curtis Institute of Music in Philadelphia. His teachers were Efrem Zimbalist and Toshia Eto; chamber music study was with Jascha Brodsky.

At 19, Sugitani became the first Japanese participant in the Marlboro Festival in Vermont and returned to play again seven years later. Other chamber music performances include the Bay Chamber Festival in Maine. In 1963 he returned to Japan as the concertmaster of the Tokyo Symphony Orchestra. He also taught at Toho Institute.

In 1966, Sugitani joined the St. Louis Symphony Orchestra as assistant concertmaster. He presented recitals locally, in Japan and in Shanghai. Sugitani taught at all of the major colleges and universities in St. Louis, including the former St. Louis Conservatory of Music.

He is survived by three children, a granddaughter, and two siblings.