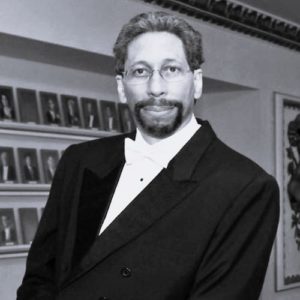 holds music degrees from the Oberlin Conservatory and the University of Kansas. He has conducted at the Aspen Music Festival and the Shenandoah Valley Music Festival and has studied with such distinguished conductors as Sir Georg Solti, Leonard Slatkin, Edo de Waart, and Jorge Mester. He has also been a Fulbright Fellow, teaching and conducting in Paraguay as the country was expanding its classical music infrastructure. He is the Principal Guest Conductor of the Asuncion Symphony.

Outside of the USA, he has been a guest conductor for orchestras and festivals in Brazil, Argentina, Venezuela, Paraguay, Spain, and Italy. In this country, he has been a guest conductor for the St. Louis Symphony and various orchestras in Kansas, Colorado, Illinois, Florida, and Atlanta, Georgia. He has been Music Director for the Lawrence Chamber Players, the Hutchinson Symphony, the Metropolitan Ballet of Topeka, the Metropolitan Ballet of Wichita, and the Alton Symphony.

A lover of opera, Burke has sung roles for productions of Carmen (El Dancairo), The Magic Flute (Sarastro), Tosca (Sacristan), Amahl and the Night Visitors (Balthazar) and sung in the chorus for Peter Grimes, Eugene Onegin, Fidelio, The Flying Dutchman, and Die Fledermaus. He has conducted Cosi fan Tutte, The Marriage of Figaro, The Barber of Seville, Das Rheingold, Carmen, The Love for Three Oranges, Bluebeard’s Castle, The Secret Marriage, Othello, I Pagliacci, The Old Maid and the Thief, Amahl and the Night Visitors, Slow Dusk, and others. He was the conductor for a revival of The Very Last Green Thing for Opera Theater St. Louis.

A multifaceted musician, Dr. Burke has been teaching voice at East Central College in Union, Missouri and at St. Louis University. He has appeared as a bass soloist for The St. Louis Symphony’s presentations of Bruckner’s Te Deum and Basso Profundo in Bartok’s Cantata Profana. After several years of singing the bass solos for the annual presentation of Handel’s Messiah in Harvard, Massachusetts, he is scheduled to return to lead this annual festival as its Conductor and is scheduled to sing the title role in Bluebeard’s Castle with the University City Symphony Orchestra in November.

Dr. Burke wants everyone to know that his inspiration to be a musician was his mentor, and GFO founder, Dr. William Schatzkamer and his musician friends.