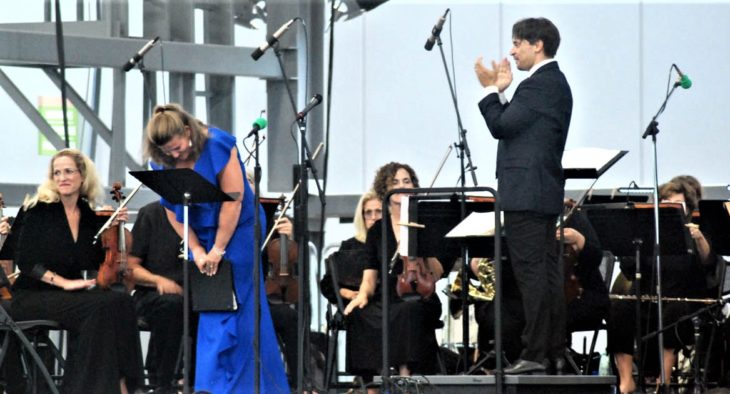 Ms. Hotle holds a Bachelor of Music degree from the University of Illinois at Champagne-Urbana and Master of Music from the Manhattan School of Music where she studied with David Krakauer. She is a member of the instrumental music faculty of Washington University and of the Community Music School of Webster University.

Italian mezzo-soprano Benedetta Orsi is one of the 2018 nominees for Outstanding Achievement in Opera by St. Louis Theater Circle for her performance as Carmen.

Ms. Orsi is one of only a few contemporary mezzo-sopranos to have performed all three of Donizetti’s Tudor Operas. Recent performances also include Adalgisa in Norma with Winter Opera St. Louis, the title role of Carmen with Winter Opera St. Louis and with the Boulder Symphony Orchestra, Mamma Lucia in Cavalleria Rusticana with the New Jersey Festival Orchestra, Ulrica in Un Ballo in Maschera with the Miami Lyric Opera and Maddalena in Rigoletto with Amore Opera.

Her first album “Christmas Around the World” won the Double Silver Medal at the Global Music Awards in Los Angeles. Her latest, “La Voix de l’Amour,” won the Gold Medal as Best Album.

Along with concert appearances at Carnegie Hall in New York City and throughout Italy, England, the United States and Spain, Ms. Orsi’s performance credits include roles in Verdi Rigoletto, Trovatore, Bellini Norma and La Sonnambula, Rossini L’italiana in Algeri and Il Turco in Italia, and Massenet Werther.

​Benedetta is a first prize winner of the Barry Alexander International Voice Competition (IVC) and first prize and Star Performer award in the American Protégé IVC; third prize winner of the Roschel IVC, and Audience and Orchestra Award in the Boulder Music Institute IVC. In her homeland, she received the Audience Award and Special Prize of the Italian Music Federation during the 28th Piero Boni International Singing Competition.

Cathleen Woelbling-Paul, oboe, English horn, oboe d’amore, is a native St. Louisan. She received a Bachelor of Music Education and Performance degree from Lindenwood University and a Master of Music degree from Northern Illinois University. She is currently Adjunct Professor of Oboe at Webster University, and Oboe instructor with Webster University Community Music School. Prior to joining Webster University, she taught at Washington University and Lindenwood University. Ms. Woelbling-Paul has performed Morricone’s Gabriel’s Oboe from THE MISSION with the St. Louis Wind Symphony and at the Missouri Music Educator’s Conference. She has been a soloist with Gateway Festival Orchestra, performing works by Barbara Harbach and by John Thomas. She performed Copland’s A Quiet City with the Gateway Festival Orchestra and the Webster Orchestra.

Ms. Woelbling-Paul is Treasurer of the Board of Directors of the Gateway Festival Orchestra, a member of Mu Phi Epsilon professional music fraternity, and an adjudicator for the Missouri All-Suburban Band Auditions and Alton Symphony Young Artist Competition.

Timothy Crockett is an active chamber musician, freelancer, soloist and educator who has performed as percussionist all over the world. He is cofounder and member of sidexside Percussion Duo with his wife Kurena Yamaguchi. Since 2017, he has been principal timpanist of the Gateway Festival Orchestra and has also held positions with the American Wind Symphony Orchestra, the Terre Haute Symphony Orchestra, and the Chicago Civic Orchestra. Born and raised in St. Louis, MO, he began playing percussion at age 11. He earned his Bachelor of Music and Master of Music degrees from the Indiana University Jacobs School of Music.

Kurena Yamaguchi is an active marimbist, chamber musician, soloist and educator who has performed throughout Japan, the United States and Europe. Before cofounding the sidexside Percussion Duo in 2013, Ms. Yamaguchi performed in many different chamber groups in Japan and Europe. From 2007-2013, Ms. Yamaguchi and Miyako Yoneshige formed the marimba duo RadiMarish. From 2006-2013, Ms. Yamaguchi and Momoko Ishikawa performed as natree, a marimba and piano duo that performed classical and pop music. An active participant in chamber music and soloist music competitions all over the world, Ms. Yamaguchi has received top prizes at the Yokohama International Music Competition, JILA Music Competition in Tokyo, Japan, and the 16th KOBE International Music Contest. In addition to performing as a chamber musician and soloist, Ms. Yamaguchi was a member of the Le Rose Marimba Orchestra from 2007-2009 in Tokyo, and a member of the American Wind Symphony Orchestra’s 2012 tour. Born and raised in Yokohama, Japan, Ms. Yamaguchi started studying piano at age 4, and marimba at age 7. She received her Bachelor of Music degree from the Musashino Music Academy in Tokyo.

Ms. Yamaguchi will perform the Marimba Spiritual by Minoru Miki with the Gateway Festival Orchestra,
7:30 PM, Sunday July 18, at the Chesterfield Amphitheater.