The mission of the Gateway Festival Orchestra is to bring quality symphonic and chamber music to the St. Louis Community – especially to children and youth, the elderly, and the disadvantaged – through free public concerts. This mission is fulfilled through a summer symphony series which includes opportunities for young musicians. In addition, ensembles from the orchestra perform at schools, summer camps and assisted living facilities.  Since the founding of the orchestra, inclusion has been considered an important dimension of GFO’s policy and therefore does not permit discrimination on any basis that is prohibited by law.

The Gateway Festival Orchestra of St. Louis was established in 1964 by William Schatzkamer, Professor of Music at Washington University, together with St. louis Symphony members Alexander Lydzinski, Henry Loew, and Jerome Rosen, with the support of community leaders Kenneth Billups, Lily Kaufman, and Martin Lanznar. At that time, the St. Louis Symphony season lasted only six months, leaving the summer devoid of symphony concerts and causing local musicians to be in need of musical employment. The Gateway Festival Orchestra was created to fill those needs, providing free summer concerts by professional musicians playing music from the symphonic repertoire. The first performances took place near the Gateway Arch construction site by the Mississippi River.

Considering its time and place, the new orchestra was remarkable for its racial diversity.  Thirty-nine of its musicians were members of the all-white American Federation of Musicians Local 2, and eleven musicians were members of American Federation of Musicians Local 197, which was composed entirely of African-Americans. These two locals later merged.

Since its inception the GFO has been led by a succession of outstanding conductors. William Schatzkamer served from 1964 until his retirement in 2002.  The baton was then passed to Dr. James Richards who led the Orchestra through 2018.  Present-day Music Director/Conductor, Maestro Darwin Aquino, began his tenure with the GFO in 2019.

Beginning in 1970, the Gateway Festival Orchestra performed in the open-air shell of the Brookings Quadrangle on the Washington University campus. The informal atmosphere is conducive to picnicking and family attendance. Because the Brookings Quadrangle was unavailable due to construction, the 2019 concert series took place at Washington University’s 560 Music Center. There was great audience acclaim for the new venue, for the performances, and for Maestro Aquino.  The GFO made plans to hold concerts at both venues in 2020, but the season was canceled due to the COVID-19 pandemic. 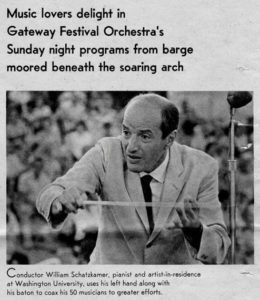 William Schatzkamer was a founder of the Gateway Festival Orchestra and its first Music Director and Conductor.  Known affectionately to many as “Willie”, he was born in New York City and received his musical training at the Juilliard School of Music. He was a fellowship student in piano under the celebrated teacher Alexander Siloti. In 1941, Schatzkamer was chosen from a field of sixty pianists to play Gershwin’s Rhapsody in Blue in New York’s Lewisohn Stadium with a National Youth Administration Orchestra.

From 1948 through 1950, Schatzkamer made recital and concert tours of the United States, Canada and Mexico under the direction of Columbia Artists Management. He played a total of 175 solo performances, including three very successful recitals in New York’s Town Hall. Immediately after the first of these Town Hall recitals, he signed a contract with RCA Victor.

In 1951, Schatzkamer joined the faculty of the Music Department of Washington University in St. Louis, and he held that position until 1987. He made his St. Louis Symphony debut in 1956. In 1964 Schatzkamer became the founding conductor of the Gateway Festival Orchestra of St. Louis. In that role he set the high musical standards that GFO musicians strive to achieve at every performance.

He also served as the conductor of the Washington University Orchestra, the Northwest Plaza Orchestra, the Belleville Philharmonic Orchestra, and the University City Symphony Orchestra. Maestro Schatzkamer retired from the GFO in 2002 at the age of 86, having established the GFO as a cultural treasure in the St. Louis area. He passed away in 2012. 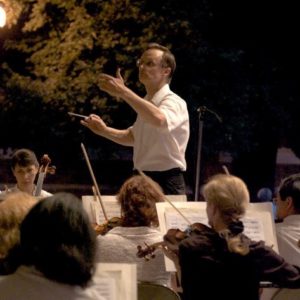 He held the position of Founders Professor of Music at the University of Missouri-St. Louis, where he chaired the UMSL Department of Music for six years, conducted the University Orchestra and served in a variety of leadership roles in the College of Fine Arts and the School for Fine and Performing Arts. He was an active violinist in the freelance community and conducted several local orchestras such as Kirkwood Symphony, Alton Symphony, The St. Louis Chamber Orchestra and others at different stages of his extensive career. He also frequently appeared as a guest conductor and clinician for symphonic band and orchestra festivals thoughout the United States.

Dr. Richards became Conductor of the Gateway Festival Orchestra in 2002, at a time when support for the orchestra was changing dramatically. In the GFO’s early days, rehearsals and concerts had been fully funded through the Musicians’ Performance Trust Fund set up in an agreement between the International Musicians Union and the recording industry. As the recording industry changed, the Trust Fund diminished and it became necessary for the orchestra to develop new sources of funding. Donors and grants became very important to the orchestra’s survival. Dr. Richards’ forward vision enabled the GFO to make that difficult transition successfully.

Maestro Richards retired from the GFO at the end of the 2018 season and relocated to California where he is currently Specialist in Orchestra and Strings for ECS Publishing Group.